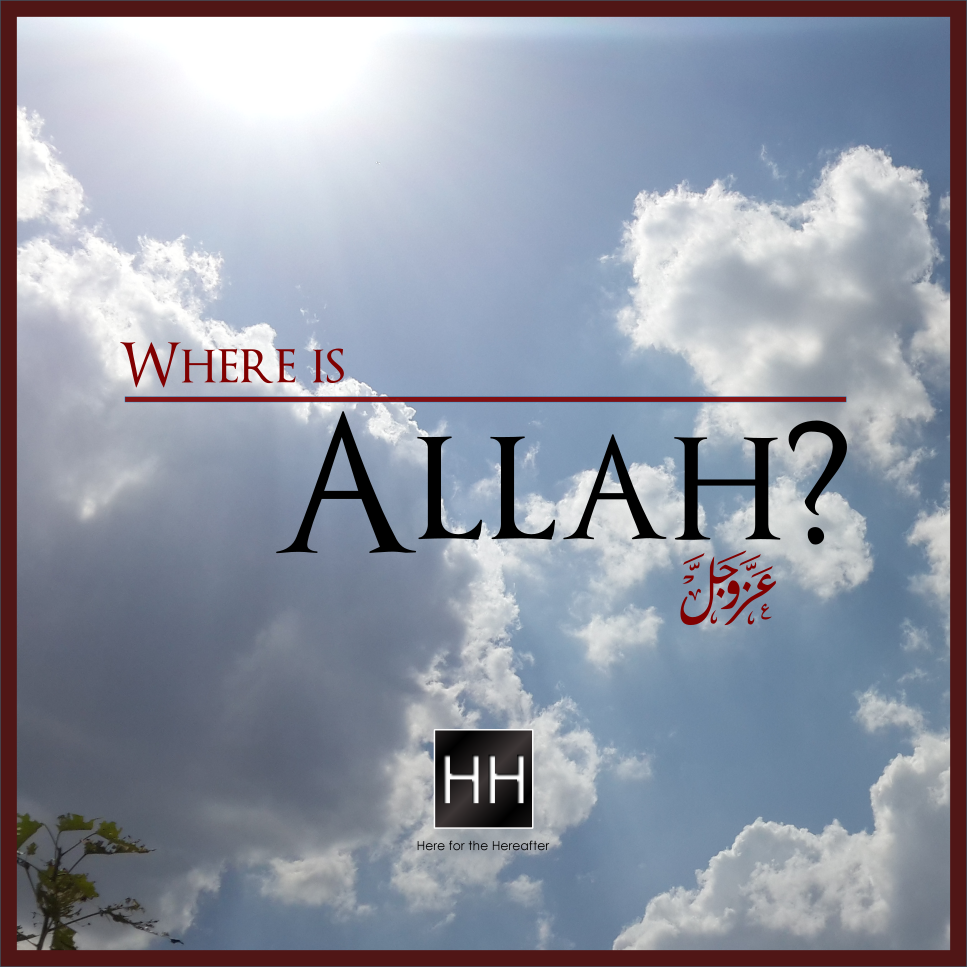 Allah is above His Creation. To be more precise: He is above the seven heavens, above His ‘Arsh (Throne) over which our Lord rose in a manner that befits His Majesty.

Now even though it is a very simple answer that the Sahabah (the companions of the Prophet SallAllahu ‘Alayhi wa Sallam) and a good number of generations after the Sahabah believed in with complete conviction, there is a lot of confusion that exists amongst the Muslims with regards to it in today’s time.
Let’s make it very clear so that by the time you are finished reading this piece, there is not even a shadow of a doubt left in you about where Allah, the All Mighty and Majestic, is.

Here are the 3 views that are popular amongst the Muslims concerning where Allah is:

Now let’s compare all the views above with 4 things to see which one is correct:

1) Let’s start with what the Quran and Prophetic Sunnah say.

The Quran describes the “exaltedness” or “highness” of Allah in different ways.

a) In terms of being high and above, Allah says in the Quran:

“Glorify the Name of your Lord, the Most High …”

“And He is the Irresistible, above His slaves …”

“They fear their Lord above them, and they do what they are commanded.”

In the Quran there is also the affirmation that Allah is above the heavens:

Do you feel secure that He, who is above the heaven, will not cause the earth to sink?

Indeed your Lord is Allah, Who created the heavens and the earth in Six Days, and then He Istawa (rose over) the Throne…

The Most Beneficent (Allah) Istawa (rose over) the (Mighty) Throne.

b) In terms of things ascending to Him, Allah says in the Quran:

To Him ascends good speech, and righteous work raises it.

The angels and the rooh [Jibreel] ascend to Him.

c) In terms of things descending from Him, Allah says in the Quran:

He [Allah] arranges [every] affair from the heavens to the earth.

Indeed, it is We Who have sent down the dhikr [the Quran].

The Prophet SallAllahu ‘Alayhi wa Sallam is reported to have said: “O Our Rabb! You are in the heaven, and we are on the earth…,”

He SallAllahu ‘Alayhi wa Sallam is also reported to have said: “Our Rabb is Allah Who is in the heaven…”

[Reported by Abu Daawood, Ahmad, and others]

He used to say “Subhana Rabbi al-A’ala (Glory be to my Lord Most High).”

He also used to raise his hands towards the heavens when he made du’a (supplication), as reported in many ahadeeth.

[Reported by Imam Muslim, Abu Dawood, and others]

This young girl was uneducated, as many are, and she was a slave, but she knew that her Lord is above the heavens.

Hence according to the above, View number 3 is the truth.

2) Now let’s move onto what the Scholars amongst the Salaf (our righteous predecessors) say.

Shaykh Muhammad ibn Saalih Al-’Uthaymeen, a great scholar of Islam who followed the teachings of the Quran and Sunnah, writes the following in his Tafseer (explanation) of Ayat Al-Kursi:

The word ‘Salaf’ refers to the companions of Allah’s Messenger SallAllahu ‘Alayhi wa Sallam and the Imams of guidance from the first three generations of whom the Messenger of Allah SallAllahu ‘Alayhi wa Sallam testified for as to their superiority when he said: “The best of mankind is my generation (the generation of the Sahabah), then those who come after them, then those who come after them.” [Reported by Imaam Ahmad in his Musnad, Al-Bukharee and Muslim]

Once again, we can confirm that View number 3 is the truth.

3) Now let’s move on to see this in terms of our common sense.

‘This position is absolute negation because it is a description of non-existence. Some scholars said, “If we were asked to describe ‘non-existence’ we would not find a more comprehensive definition than this description [View number 2].’ (End of quote.)

He also writes: ‘If we say that, “Allah is either above the world or under it or on its right or left,” then which of these descriptions denote perfection? The answer is, “Allah is above the world,” because if he is “under it” then He would be less perfect than the created! And if He is in the same place as the created, then Allah would be equal to him in perfection. Thus it is necessitated that Allah is above everything.’ (End of quote.)

And so it becomes even more clear why View number 3 is the truth.

4) Finally, let’s move on to see this in terms of our own innate instinct/natural inclination (Fitrah).

Think about it! When something troubles you, or when you want to ask Allah for something do you look in all the directions or do you look towards the heavens?

Shaykh Muhammad ibn Saalih Al-’Uthaymeen writes: ‘Each person naturally acknowledges the fact that Allah is above the heavens. That is why whenever a person supplicates to His Rabb (Allah) he/she takes refuge towards the direction of the sky (i.e. upward).’ (End of quote.)

He also writes: ‘The strange thing is that those who deny the Transcendence of Allah themselves raise their hands upward in the direction of the heavens when they invoke Allah.’ (End of quote.)

And so View number 3 is the absolute truth.

The answer to this is simple. When Allah says ‘We are closer to him’, He refers to His angels whose task it is to record people’s deeds. Those who said that it means that He is near explained it as meaning that He is near by His knowledge.

Tafsir Ibn Kathir in his explanation of the Quran says the following concerning the ayah ‘We are closer to him than his jugular vein’:

The problem in understanding these Ayaat for most Muslims comes because they do not understand it like the way our Salaf understood it according to the teachings of Prophet Mohammed SallAllahu ‘Alayhi wa Sallam. This is why it is very important that we interpret everything in our religion only according to the way it was taught to us and practiced by the Prophet SallAllahu ‘Alayhi wa Sallam and not according to our own logical reasoning. 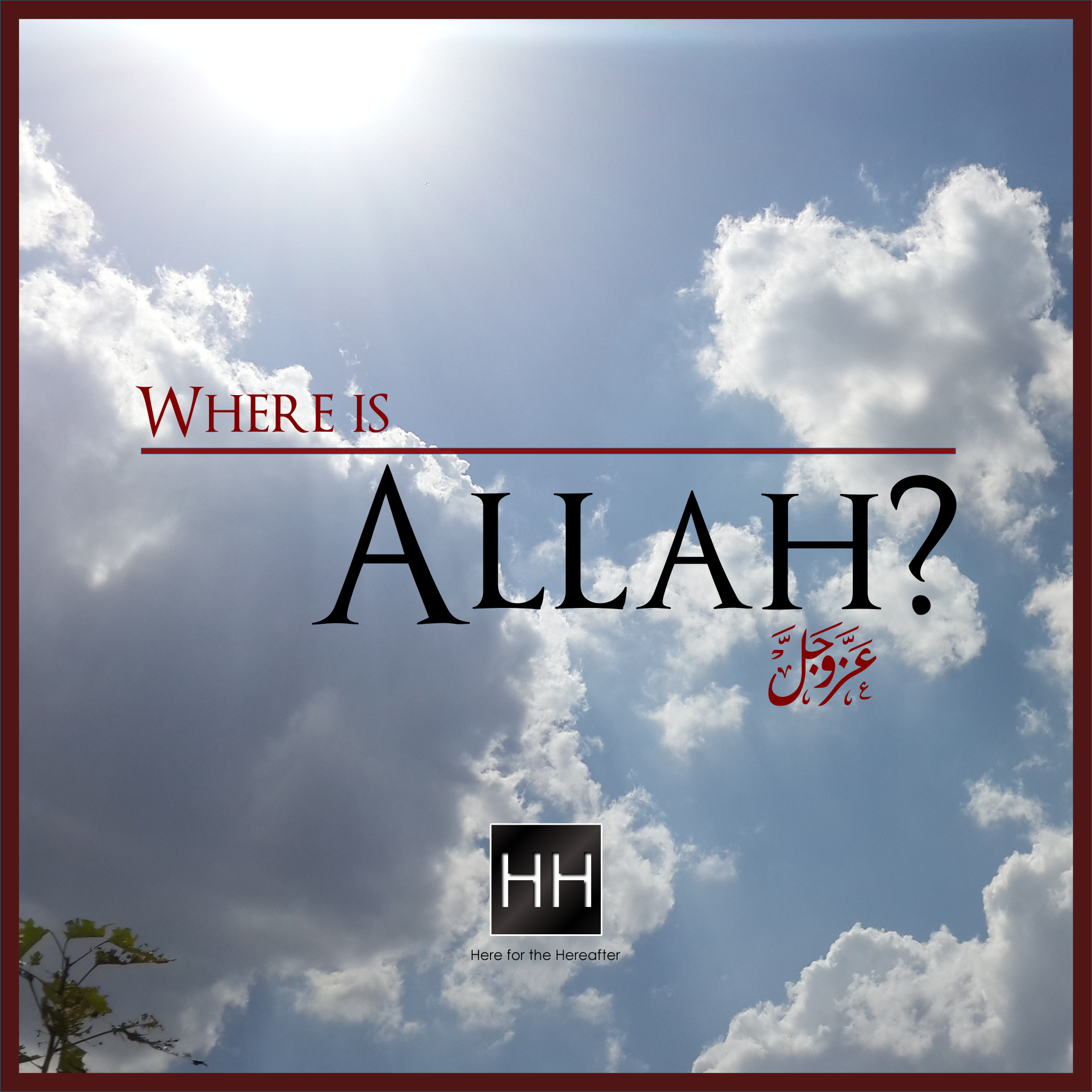 Resources used to compile this answer: