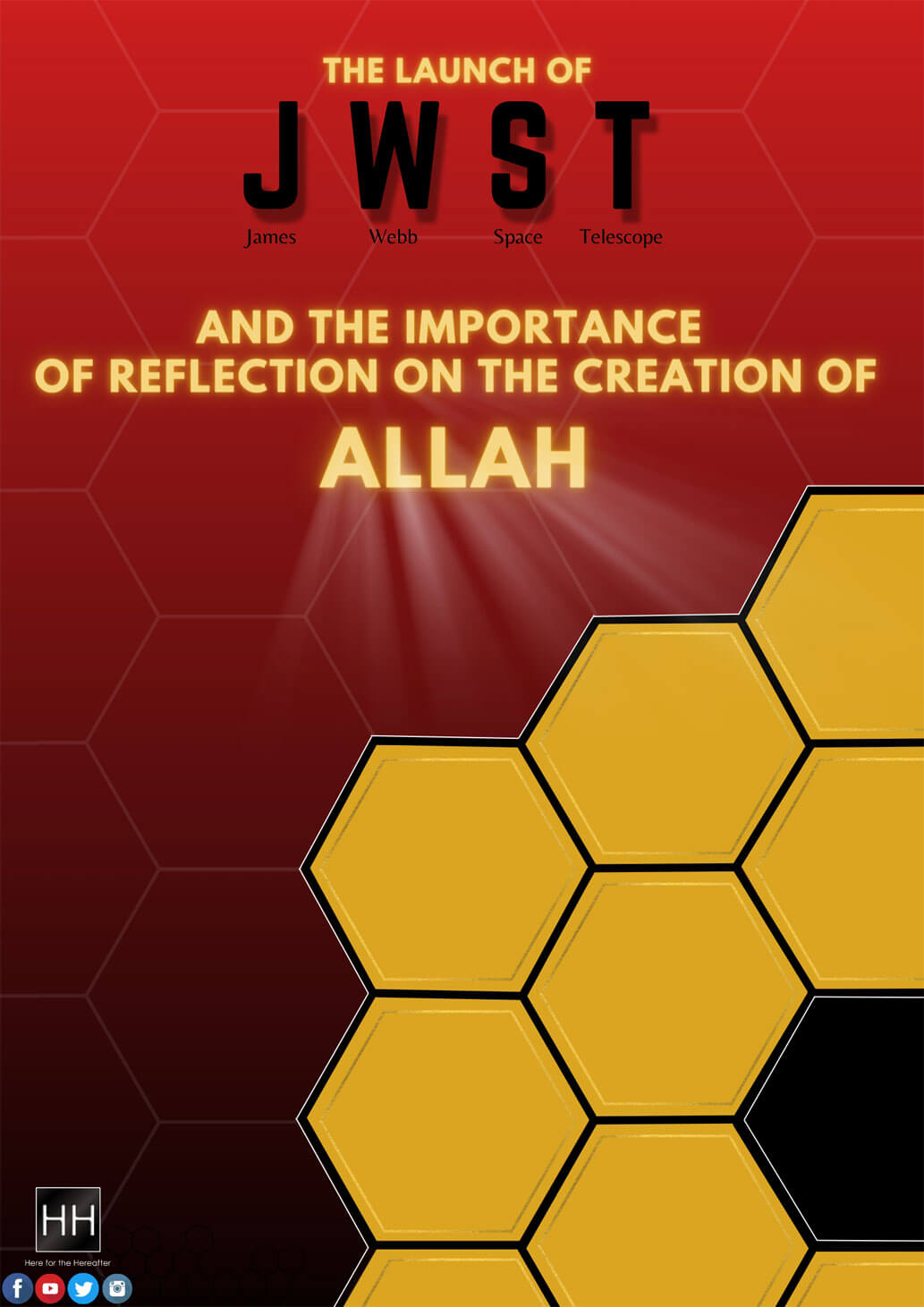 James Webb Telescope and the Importance of Reflection

1. To observe the creation and ponder upon it.

2. To contemplate on the ayahs of Allaah عز و جل mentioned in the Qur’an.

If we were to sincerely acknowledge the above two points and implement them in our lives then there is no doubt that we will recognize Allaah عز و جل, and will strive to make our lives better in this world and the Hereafter by implementing the correct belief in Allaah عز و جل and His Messenger, the obligations in the religion of Islaam and by performing voluntary acts of worship because of the ‘ihsaan’ we develop in ourselves by Allaah’s عز و جل permission (i.e., as per the hadeeth of Jibreel: That you worship Allaah عز و جل as if you are seeing Him, for though you don’t see Him, He, verily, sees you.).

One of the amazing signs that we can reflect upon is the creation of the heavenly bodies and the space which exists out of the atmosphere of the earth. We have read a lot about the sun, the moon, and the planets but let us today see what some extraordinary technology has brought for us from the voids of darkness beyond the earth’s atmosphere.

Growing up, with our eyes we witness the sunrise and sunset, we see the beautiful full night moon and the amazing sight of the stars on clear summer nights but there are also things which are not visible to the naked eye (at least under the city lights). One example I would like to present from my amateur astrophotography is the ‘Orion Nebula’.

1 The Orion Nebula captured by the author in suburban Melbourne, Australia. A wiki page on what are nebulas: https://en.wikipedia.org/wiki/Nebula

This beautiful creation of a hot gaseous interstellar cloud is up there in the sky and is a constant reminder for me that such beautiful objects exist and many more like it which are not easily seen with our eyes. The revolution in scientific instrumentation in telescopes and other technologies has enabled us to discover many more objects similar to it in space. We are so advanced right now that we can capture some (stacked) pictures of such nebulae or galaxies using ground-based telescopes with cameras in our house backyards but bear in mind it is an expensive hobby and is much feasible if we live far away from the city!

One such technological advancement on a massive scale was way back in 1990, the launch of the revolutionary Hubble Space Telescope. Hubble captured and produced some amazing pictures of nebulae and galaxies over the decades. One such amazing capture is that of the “Eagle Nebula” or specifically known as the “Pillars of Creation” within the Eagle Nebula.

We can see how in this picture above how awe aspiring is the creation of Allaah عز و جل, such magnificent clouds are of the size beyond our imagination, the elements it is made up of are the source of light which makes it so beautiful. No doubt, this one image itself is a masterpiece.

Recently, in the year 2021, the launch of the James Webb Space Telescope was commissioned on the 24th of December. This is a breakthrough in space telescopes because this space telescope is Hubble 2.0, and that means it is a successor to the Hubble Telescope.

The exciting thing about JWST is it will help us answer questions like, What lies deep within the space? What is out there yet to be discovered? How can it help solve a few theories about the Universe? These are some questions we can anticipate an answer for from JWST, in shaa Allaah. No doubt, this is exciting stuff we are looking forward to. But as we wait for the next scientific breakthroughs we need a reminder for ourselves to remain grounded in our faith. We should know:

All of this is by Allaah’s عز و جل permission.

We as mankind forget that we own nothing in this universe, Allaah عز و جل has given us everything and thus we should never be arrogant in accepting the truth, and acknowledging our weakness and limitedness. The scientific community at large these days tend to get arrogant thinking that they know everything about the universe (when theories are presented as facts to the general public) but we should always keep in mind that “our eyes can only reach a distance”, i.e., we are limited and whatever we have from our amazing minds to resources that we use to make intelligent hardware and software is all from the blessings of Allaah عز و جل.

In the last couple of decades, we have seen several advancements in technology, in AI, and other inventions but this was only possible because of the amazing intellectual brains Allaah

عز و جل has given to us as mankind. The exploration of space, i.e., what lies beyond earth’s atmosphere is also by Allaah’s permission.

“O assembly of jinn and men! If you have power to pass beyond the zones of the heavens and the earth, then pass beyond (them)! But you will never be able to pass them, except with authority (from Allâh)!” (Qur’an 55:33)

Thus, in the conclusion of this reminder, a believer in Islaam should not doubt that whatever happens in this universe is by the permission of Allaah عز و جل.

Don’t fall for the bait.

Some people from the scientific community who fail to recognize their Creator because they fall short on sincerely pondering upon the creation and the purpose of life often come up with scientific terms or sentences to create confusion from their articles, videos or any other form of media to those who believe in their Creator. To cite a few examples, “JWST will reveal the origin of the Universe”, “JWST will confirm if the Universe is 14 billion years old” or any other such catchy headlines aimed at the common masses as click baits and possibly to spread scientific theories (presented as facts!). For example, the scientists state that the universe is around 14 billion years old and they have come up with this number using something known as the “Hubble constant” in Cosmology. This constant has been adjusted over the decades so much so that this constant now encapsulates (the time required for) the Darwinism evolution that we as mankind evolved over millions of years from micro-organisms. So yes, science today especially in the field of Cosmology and Theoretical Physics heavily involve theories rather than observation and testable evidence (and is rapidly also getting Philosophy involved with a concept like a multiverse and this can be seen in the latest studies of Quantum Mechanics).

The bottom line here is, as much exciting and promising the project of JWST is, we should remember not to go overboard with regards to believing and promoting everything the scientists or the media say about it.

How many aayaat in the Qur’an invite us to reflect upon the creation of the heavens and the earth and yet many of us are so busy with this materialistic life that we do not pause to reflect as this is one of the most important activities in our lives which pushes us to sincerely turn towards our Creator. To cite a few aayaat from Surah Aal-Imran,

“Verily! In the creation of the heavens and the earth, and in the alternation of night and day, there are indeed signs for men of understanding.” (Qur’an 3:190)

“Those who remember Allâh (always, and in prayers) standing, sitting, and lying down on their sides, and think deeply about the creation of the heavens and the earth, (saying): “Our Lord!

You have not created (all) this without purpose, glory to You! (Exalted are You above all that they associate with You as partners). Give us salvation from the torment of the Fire.” (Qur’an 3:191)

Even with the launch of JWST and the anticipation of what lies deep into the space, the revelation of it will be by Allaah’s عز و جل permission alone, it sure will bring excitement to mankind for a few days and then we usually forget about it just because this is (the mentality of mankind) going on since the beginning of our creation. We see amazing aayaat like the glorious sunrise and sunset, the magnificent mountains, the beautiful birds and flowers…, these are only to name a few from the creation and we do not reflect upon them as we have taken them for granted and just as a part of the system. As believers, one must spend ample time reflecting upon the heavens and the earth and it is a key to a huge success as it will help us recognize our Lord through His Lordship (Tawheed Ar-Ruboobiyah), it will make us strive to worship Him alone without associating any partners to Him (Tawheed Al-‘Ibaadah), and it will make us know our Lord through His beautiful Names and Attributes (Tawheed Al-Asmaa ul Husna).

Concluding, to reflect, ponder, contemplate, whatever you call it, will facilitate us to bring about love, hope, and fear of our Lord and will bring us near to Him by His permission. May Allaah عز و جل facilitate us to ponder upon His creation and upon His Glorious book, Al-Qur’an.