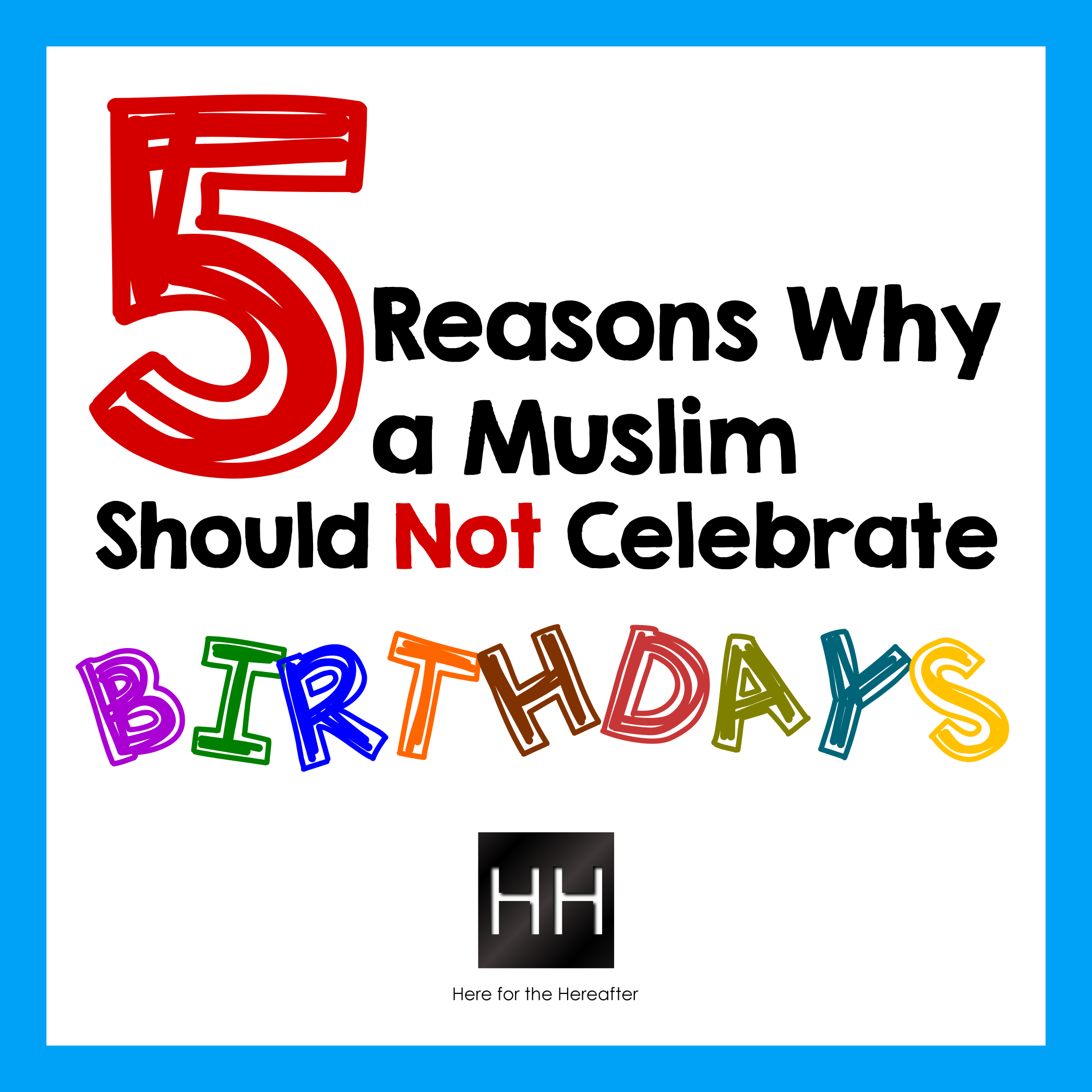 5 Reasons Why a Muslim Should Not Celebrate Birthdays

We are in 2016. Did the world begin 2016 years ago?  If that were true it would mean that the world started in 0001 AD. If not, then why are we in 2016?
We are in 2016 AD because we follow a calendar that was made by the religion of Christianity – currently the religion practiced by the majority of people on Earth. Now, the question is why do we need to follow the Christian calendar? Don’t we have a calendar of our own?

A Muslim knows that we have our own calendar. It’s called the Hijri calendar. And this is the calendar which we are supposed to follow. Now because of the circumstances in the world we live in today, there must be a standard calendar like the Gregorian or the Christian calendar that everyone can follow. But that should only be limited to our worldly affairs like paying rent, calculating salaries etc. We should use it keeping in mind that this is only a dharoorah (necessity) and Islam permits certain things (that are normally haram or forbidden) when there is a necessity.

2: The origin of celebrating birthdays is unknown to the majority

Now, I don’t want to waste your time elaborating this point because our friend Google can help you. There is a lot to read and watch about this out there.(1) The summary of it is that birthday celebrations – whether it be cutting cakes, lighting candles etc. have pagan origins and it is linked with false divinely beliefs that people held. Just to give you a quick example, the candles which are put on the cake have to be blown in just a single blow. If even one candle was left lighted, people used to think that the upcoming year would bring hardships for the person whose birthday is being celebrated.

3: Imitation of the non-believers

If you understood the point above (which I assume you obviously did), you will be able to understand this one clearly. There are numerous ahadeeth in which the prophet sallallahu ‘alayhi wasallam prohibited imitating the non-believers. I will just mention two:

The Prophet sallallahu ‘alayhi wasallam said: He who copies any people is one of them.

You would tread the same path as was trodden by those before you inch by inch and step by step so much so that if they had entered into the hole of the lizard, you would follow them in this also. We said: Allah’s Messenger, do you mean Jews and Christians (by your words)” those before you”? He said: Who else (than those two religious groups)?

For guidelines regarding imitating the non-believers, please visit the following link:  https://islamqa.info/en/21694

When asked about the reason for birthday celebrations, most of the people come up with this, “Akhee/Ukhti, I want to thank Allah for the life He gave me, that’s why I want to throw a party and thank Allah.” Hold on, hold on! Tell me is thanking Allah from the acts of worship or not? The answer is that it’s from the acts of worship. One must know that every act of worship has two conditions:

You may be celebrating for the sake of Allahs pleasure, but are you following the Sunnah? Since celebrating birthdays doesn’t meet condition (2), it becomes an innovation which will not be accepted by Allah. If you really want to thank Allah then do what the Prophet sallallahu ‘alayhi wasallam taught us with regards to thanking Allah and do not innovate in this beautiful religion by practicing it according to the way you think is right.

5: Life is short. Do not forget your purpose of life!

We should actually ponder and reflect on our birthdays rather than jump around with birthday snow spray.  We should see time to be passing like a countdown timer. If a person is in his twenties, he should realize that one third of his life may be over. He should ask himself with regards to the preparation he has attained to meet Allah. “Am I ready? What have I done till now for my akhirah? What if I die now? Is Allah pleased with me?” should be the questions haunting his mind. Remember this hadeeth?

It was narrated from Abu Hurairah that the Messenger of Allah Sallahu Alayhi wa Sallam said:

“The ages of (the people in) my nation will be between sixty and seventy, and few of them will exceed that.”

So these were 5 reasons why a Muslim shouldn’t be involved in birthday celebrations. If you still want to persist in it, please remember the warning of Allah:

“And whoever contradicts and opposes the Messenger (Muhammad SAW) after the right path has been shown clearly to him, and follows other than the believers’ way. We shall keep him in the path he has chosen, and burn him in Hell – what an evil destination.”

Yeah, it’s tough to stop. Friends might start looking at you with weird expressions. Family members might think your’re becoming an extremist. But it is not impossible to stand and say that you’re going to give it up for the sake of Allah, because remember:

“You will never give up a thing for the sake of Allah, may He be glorified and exalted, but Allah will replace it for you with something that is better for you than it.”

Ahmad Hadith No. 22565; classed as saheeh by al-Albaani

May Allah enable us to spend our lives in obeying Him and prevent ourselves from His disobedience. Aameen.

For a scholarly response regarding the topic above, please visit: https://islamqa.info/en/1027

One of our readers asked us a brilliant question:

Good read but Reason 2 needs to be elaborated. Most people would understand what you mean to say. However, for a few that explanation wouldn’t suffice. For example, some might tell you that it is just a cake, what is so wrong about that?

We were very happy to respond to this query and you can read the answer by clicking here.