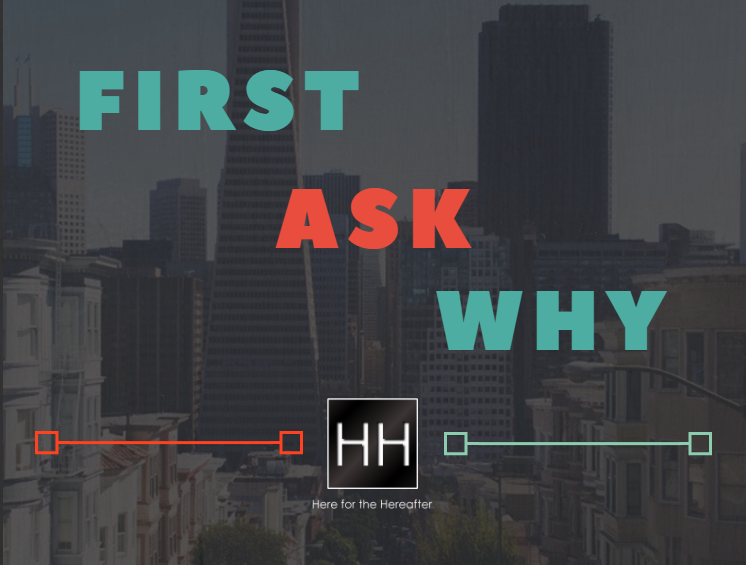 Professor Hefley sat on the empty table across John Doe and with a  cheerful smile on his face asked him,
“So why did you come late to class John?”
John was caught completely by surprise and in a shy voice muttered the words,
“I missed the early bus”,
hoping that the rest of the class wouldn’t hear. But of course, they did. Professor Hefley’s smile widened and then he asked John,
“Why did you miss the bus?”
John quickly answered,
“I couldn’t make it to the bus stop on time”.
“Why couldn’t you make it on time?”.
John took a moment to recall and then replied,
“I was speaking to someone on the phone.”
Professor Hefley didn’t stop there, he asked,
“Why were you speaking on the phone?”
John was having fun at this point, and once again resorted to the mode of thinking.
“There was this package that I was expecting from India that did not arrive on time. I needed to make an inquiry.”
The professor theatrically exclaimed,
“Aha! That is the problem you see!”
The professor pointed out to John that the phone call wasn’t made on the right time and also that his package not arriving on schedule was a reason for John to come late to class.

This episode took place in a Project Management class where the subject of the day was Project Quality Management. Specifically, what do when there is a problem in quality. And this is how Clinical Professor Hefley would teach us, by giving us real-time, understandable examples of the subject matter he was presenting at hand, with a touch of humor. He would use the environment around him and spontaneously come up with remarkable examples to explain complex concepts. He once had to explain this concept of  object ‘encapsulation’ in software development during object oriented analysis in the problem domain, which was for information hiding that enforces protection of what goes on inside an object from the outside world  to ensure no one can change the way the software operates without permission and they just have to trust it works. To explain this jibberish, he grabbed a glass of water that just happened to be in front of him and took a big gulp. And then he asked the class while rubbing his tummy,
“Do you know whats going on inside?”
The class replied, “No!”
“But do you trust it?”, he asked with a grin.
And the class all nodded their head in approval of the point they had got.
And then there was this other instance where he had to explain the messaging that takes place between objects in an information system and that a return value is a reply that a message may invoke from the receiving object after an operation has been complete. To explain this, he just shouted “Marco!” and someone from the back of the class who knew the game shouted back “Polo!”. The concept was seared into the mind from that moment onwards.

This man was very talented as a teacher and I would always be at the edge of my seat in his class while he passionately delivered his genius on the subject until he would start to lose his breath. No wonder he has accomplished so much in his profession from being a Project Manager and System Developer in top class MNC’s; researcher and Ph.D holder in Computers, Organizations and Society; Professor, adviser and Program Director at Carnegie Mellon University and now a prestigious clinical professor at University of Texas at Dallas, the place where I happened to study under him.

Back to the John Doe incident in the Project Quality Management class. The professor was giving everyone a live example of a technique called the ‘5 Whys Technique’. This is a technique that is used when there’s a complaint for a quality problem in a project.This technique helps us to do two things:

In simple words, the technique helps you to find the root cause of a problem and then solve it.

So John Doe’s case can be summarized as follows:

The Problem:
John Doe came late to class
The Cause:
Made an inquiry call about package delivery at the wrong time
Corrective action:
Adjust time for making calls

Let’s say after further questioning we discover that the cause to John Does problem is not the call that he made. After asking him ‘Why’ he called at a time like that, he tells us that he had planned to make that call earlier but because he got into the washroom late, he ended up delaying the call. In this case, we notice that the cause of the problem has changed. And so subsequently the corrective action needs to change!:

The Problem:
John Doe came late to class
The Cause:
Got into the bathroom late
Corrective action:
Adjust time for bathroom use

And another ‘Why?’ question reveals to us that he got into the bathroom late because his alarm clock didn’t go off, which would yet again change the corrective action to take against the cause:

The Problem:
John Doe came late to class
The Cause:
Got up late because Alarm didn’t go off
Corrective action:
Check Alarm clock batteries

And with these discoveries we can draw what’s called a ‘Cause-and-Effect’ diagram, or a ‘Fishbone’ or ‘Ishikawa Diagram’. The problem or effect is placed at the ‘fish head’. The causes of the effect are then laid out along the ‘bones’. This diagram helps us easily present the entire case to simplify the analysis.

This is a very basic example of the profound use this technique has to offer. We notice that the problem remains the same, but a proper approach to problem solving helps us discover so many corrective measures to take that would help us best solve the case, because here we have to understand one very important principle that Professor Hefley taught us:

We have to correct the Cause, not the Problem

We see that upon asking a simple ‘Why’ to the individual we learn more about the problem. We discover new pathways that could potentially help us to arrive at the root cause of the problem.
By spending some time analyzing the problem and by introducing the ‘Cause‘ variable to the scenario, we can take a more appropriate and closer to accurate stance of implementing the corrective action against the Cause, and not the Problem itself. Thereby making our problems practicably solvable for a long term because we plug the cause of the problem forever.  What if we hadn’t introduced the variable of the ‘Cause’ in our measures to solve the problem? We would probably have ended up with:

The Problem:
John Doe came late to class
Corrective action:
Tell John that he is lazy

The Problem:
John Doe came late to class
Corrective action:
Punish John by commanding him to go clean the class room white board

We see that none of the corrective actions discussed above have any guarantee of solving the problem. We don’t even know whether they address the thing that lead to the Problem. It’s like throwing the dart in the air without knowing where the center of the dartboard is. Or like giving a patient a remedy without knowing what the source of the disease is! You will only score the maximum points if you know the correct way of throwing (corrective action) and hit the dartboard (the Problem) at the bullseye (‘the Cause’). And you will only have a chance of curing a cancer patient if you kill the source of the cancer cells, the Cause of the cancer cells.

Such blind problem solving skills often result in the wrong outcome such as:

But the technique of asking ‘Why’ in solving quality problems is not something new to the world. It existed centuries ago.

In his book ‘The Prophet’s Method for Correcting People’s Mistakes’ [5], Sheikh Muhammed Salih Al-Munajjid cites instances of how the Prophet Sallahu Alayhi wa Sallam solved social problems that could have otherwise resulted in viscous feuds just by first asking ‘Why’. Study the following case:

So here is the case from the garden owners point of view:

The Problem:
Abbaad rubbed the wheat of my garden
Corrective action:
Take his clock and hit him

What did that result in? Did it solve the problem? Following were the results of that corrective action:

And when the case was brought to The Messenger of Allah Sallalahu Alayhi wa Sallam, what did he do? He taught the owner of the garden to properly inquire about the ‘Cause’ of the Problem first before deciding on the Corrective Action to take. So by saying:

the Messenger of Allah Sallalahu Alayhi wa Sallam taught the owner how to deal with problem by looking at the case differently after finding out about the ‘Cause’ variable:

The Problem:
Abbaad rubbed the wheat of my garden
The Cause:
Abbad says he is hungry
Corrective action:
Give him some wheat

How else do you think the Cause of the Problem could have ever been discovered except by the owner taking the step to first ask Why?
Here is another incident that Sheikh Muhammed Salih Al-Munajjid cites in the same book where the outcome was much better because the Prophet Sallalahu Alayhi wa Sallam intervened with his wisdom to first ask Why:
Anas ibn Maalik RadhiAllahu Anhu reported:

“Whilst we were in the mosque with the Messenger of Allah (peace and blessings of Allah be upon him), a Bedouin came and stood urinating in the mosque. The Companions of the Messenger of Allah (peace and blessings of Allaah be upon him) said,
“Stop it! Stop it!”
But the Messenger of Allaah (peace and blessings of Allaah be upon him) said,
“Do not interrupt him; leave him alone.” (In another report by Bukhari, he said to them: “You have been sent to make things easy for people, not to make things hard.”)
So they left him until he had finished urinating…..Saheeh Muslim, no. 285
The incident continues in the following report where the Messenger of Allah Sallalahu Alayhi wa Sallam called the Bedouin to find out the Cause by asking him:
“What made you urinate in our mosque?” or “Why did you urinate in our mosque?”
He (the Bedouin) said,
“By the One Who sent you with the truth, I thought it was just like any other place so I urinated in it.” ….Reported by al-Tabaraani in al-Kabeer, no. 11552, vol. 11, p.220.
The Corrective action that the Prophet Sallalahu Alayhi wa Sallam took is reported to have been to advice the Bedouin the following:
“In these mosques it is not right to do anything like urinating or defecating; they are only for remembering Allah, praying and reading Qur`aan, or words to that effect. Then he commanded a man who was there to bring a bucket of water and throw it over the urine, and he did so.” …….Saheeh Muslim, no. 285

“He got up, may my mother and my father be sacrificed for him, he did not rebuke me or insult me. He just said, ‘We do not urinate in this mosque; it was only built for the remembrance of Allah and for prayer.’ Then he called for a bucket of water and poured it over the urine.” ….Sunan Ibn Maajah